Why didn’t the skeleton go to the party? Because he had nobody to go with.

Oh, heard that one before?

Recycling other people’s content is just like re-telling someone else’s joke – it gets less effective each time it’s repeated.

In marketing, just like in comedy, originality is king.

Copied copy is a cop-out. Originality is king.

Your loyal readers, your would-be readers and your would-be clients all have one thing in common: they’re as receptive to originality as they are repelled by copycat content.

We’ve hit content overload and no one has time to bother with boring content. The blogging world is cut-throat: any piece of content you write that is unoriginal or uninspired just won’t get the clicks, reads and shares you want (and need) it to.

The fact is, while some marketers settle for cheap content that fills a page, the best marketers strive for originality. 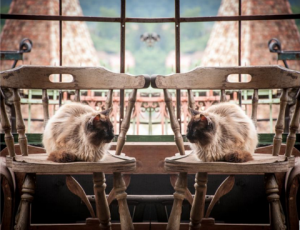 So, how can you stop being a copycat, find that essential originality in your writing and prevent your content from drowning in a sea of similar stuff? These three tips are a great starting point:

Deadline panic can push copywriters into writing about over-saturated topics. If you don’t think you have time to come up with original ideas, but you want to be a great copywriter, then make time: your article will fall-flat if there’s already good content out there saying the same thing.

Do the research, look at what your competition are saying, and – more importantly – look at what they’re not saying. If you can find a topic that no-one is writing about, you’ve got your original content before you even type a letter.

Writing on issues strictly relevant to your company’s product or services may seem like the best way to attract the right customers, but it’s not.

If you want to attract more people, speak to them with original content based on things they would be interested in, not just things they might want to buy from you.

Customers are individuals: they have interests outside the narrow scope of what you’re selling, and so do you. Don’t limit the reach of your content: use your out-of-work interests to create unique content enhanced by your individuality.

Your interests can even serve to spice up content that could otherwise have been bland. Write about how music festivals improve productivity or how we can improve our time management skills by watching Forrest Gump.

If you work alongside a diverse team with diverse interests, don’t let those interests go to waste by having everyone write in your company’s limited niche.

As copywriters, we have our formulas for engaging better with our readers:

I won’t argue about formulas, because I’m as guilty of using them as any writer. In fact, no, we’re not guilty, formulas are fine: they help us get the most out of our content.

The reason copywriters have formulas is because at some point, someone tried out those formulas and found that they worked.

But don’t lose yourself to the techniques of other people’s writing: experiment with your own.

Alter your tone of voice, write about something you haven’t written on before, be creative. Try new things and always monitor what your readers respond to, not anyone else’s.

There’s something to be said for taking inspiration from the most successful marketing, but there’s a difference between that and copying.

You can try to mirror everything a competitor is succeeding at and still fail miserably.

Or, you can take the time, prepare and write something that hasn’t been said before: something that your audience might just find a whole lot more interesting than the same-old same-old.

(Hat tip to Flickr user William Warby for his image)