Errol Morris carried out an experiment on New York Times readers. Presenting the same information in different fonts, he tested how credible it seemed. Roughly 40,000 people responded to his quiz and it turned out that even small differences between apparently similar fonts had a big impact on believability. (Hat tip: The Week.)

The difference between Baskerville and Georgia was a jump of 1.5 percent. Not huge in itself but considering that it takes one click on the font menu to change from one to the other, you can see how important the choice of font is.

Dress for the occasion 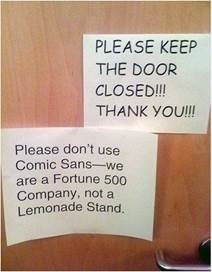 You wouldn’t wear a onesie to work, so don’t use Comic Sans in business. In fact, Morris says: ‘The conscious awareness of Comic Sans promotes — at least among some people — contempt and summary dismissal.’ Just check out these hilarious logos of famous brands, redone using Comic Sans. 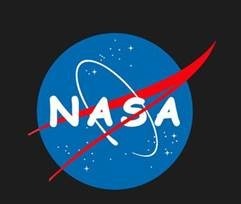 The only exceptions I’ll admit is if you work in the comic book industry (but I bet they don’t use it either) or if you’re a complete genius who discovered the Higgs Boson, in which case you can do whatever you like. 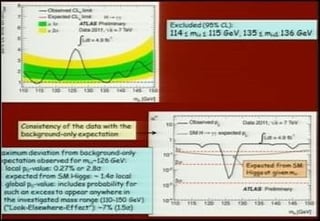 We recognise words largely from the shape they make rather than from the collection of shapes of the individual letters in the words, according to Kevin Larson, a researcher in ‘Advanced Reading Technology’ at Microsoft. (Full disclosure: Microsoft is an Articulate client.)

In other words, we see this:

We see words. Letters, not so much. (Source: Microsoft)

The ascenders and descenders help us differentiate the words. But using ALL CAPS means that these vital clues are eliminated and the only visual difference between the words is their length. It increases the cognitive load on the reader’s brain, as anyone who has read a contract preamble or an internet rant in all-caps will attest.

We don’t read in a continuous flow. Our eyes jump along a line of text like a small child hopping on hot sand in a series of saccades intermingled with short stops called fixations.

How much we take in with each eye fixation. (Source: Wikipedia)

Sometimes we jump back when we miss something or don’t understand it. When this happens, there’s a double risk: you reduce comprehension and your reader may just stop reading altogether. Ouch!

This means you want to avoid things that slow people down or force them to jump back through incomprehension. Typographical speed bumps include:

The wider the column of text the harder it is for a reader to keep their eyes on the same line as they skip along it. This is one reason why newspapers and magazines are printed using narrow columns.

You can test this out for yourself by printing the same text across a page in landscape, portrait and then two and three columns per page. Which is easier to read?

The effect of line width on readability (Source: Fonts.com)

You want your readers to read more of your text? Then use narrower columns! A good guideline is between 9 and 12 words and about 35 characters per line for unjustified text.

Fonts do graphs too

Today’s fonts are almost like programming languages and they are incredibly flexible. For example Chartwell lets you create different kinds of charts simply by typing stuff like '5+7+10+4', selecting the numbers you typed and choosing the Chartwell font. Magically the text turns into graphs.

I did a ten week evening course in typography at Central St. Martins. One of the most valuable things I learned was to stand on my chair and look at text from a distance. This is the best way to see the ‘colour’ of the text on a page and the layout and structure of text.

For lazy readers, there's even a great section titled 'Typography in ten minutes'. 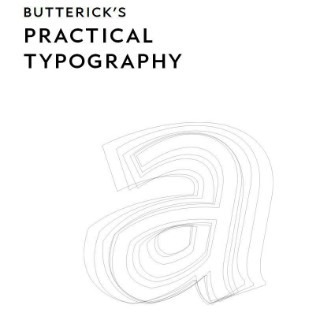