There are three kinds of lies' ex-PM Benjamin Disraeli allegedly declared, ‘lies, damned lies and statistics. Throw enough mud at the wall and some of it will stick. 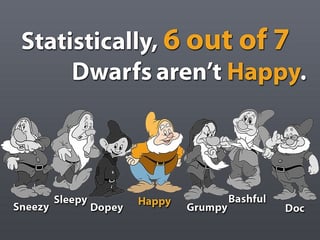 Remarkable statistics litter the public domain thanks to the spin tactics of politicians and advertisers.

Someone, somewhere will have a stat they can wangle to support their agenda.

Chances are, if your first reaction to a particular factoid is ‘wow that’s unbelievable’, you’re probably right. Implausibility is the first indicator that statistics in marketing promotion have been manipulated to create a certain desired effect, and first and foremost to sell their product.

The tip of the statistics iceberg

Darrell Huff’s ‘How to Lie with Statistics’ prove that such practise is no secret. The public are aware that they are the object of statistical manipulation; it is the elephant in the room. Emperors and clothes come to mind.

Yet the constant and active promotion of engineered data in mass media channels suggests that people must still be falling victim to these marketing ploys.

Colgate’s assertion that 80 percent of dentists recommend its toothpaste is impressive.

What you’re not told is that, during Colgate’s survey, dentists were allowed to endorse more than one brand. This little fact led to the ASA (Advertising Standards Authority) banning the campaign.

Where’s the value in statistical sorcery?

By omitting this information Colgate tried to sell itself as the market leader.

In such a crowded, domestic marketplace this is pivotal. We all know the leading brands yet have no technical, quantitative method of differentiating between them.

The full truth of the investigation reveals a quality (the minimum expectation for essentials) to Colgate’s product. But no distinction. The value of exaggerating this data superficially was that Colgate could differentiate itself.

This is, however, a dangerous example of using the ends to justify the means: a treacherous moral compass to consult.

While Colgate didn’t lie, it did withhold vital information relating to the reliability of the statistics. And as such, Colgate deceived consumers and ended up losing credibility.

Brands also misapply data when they attempt to merge correlation and causation.

For example, data might show that sales of product X (eg a certain brand of fruit juice) increase or decrease in line with effect Y (eg rate of birth of baby boys).

To link Y as a direct product of X, however, would be a misapplication of data.

To prove how easy (and ridiculous) this practise is, Harvard student Tyler Vigen set up the website ‘Spurious Correlations’, where he deliberately misuses statistics to draw droll comparisons between, for instance, divorce rate and margarine consumption.

Vigen proves that statistics are frequently over-simplified and that many variables must be investigated to prove causation.

Correlations between just two variables create a distorted reality and destroy any credence in the claims they supposedly support.

Statistics, statistics everywhere, but not a drop of truth

The exploitation of data is fast turning the use of surveys and statistics in marketing promotion into the white elephant of the industry.

Credibility and authority are key to effective marketing

Facts are used to establish these abstract ideals and encourage a customer to convert.

Yet when such methods are undermined by misapplication on a large scale, the whole shooting match begins to crumble.

Just as orators can speak for hours without actually saying anything, brands disseminate hyperbolic ‘facts’ so widely that customers tend to either block them out or conversely see them as proof of a brand’s lack of credibility and authority.