Google isn’t the only search engine that exists in the world (I know, I was shocked to find this out, too). Bing and DuckDuckGo are real places on the internet, and people are using them instead of ‘googling it’.

‘Why?’ I hear you cry. That’s a great question. If you’ll indulge me, I have some answers prepared…

Here’s what you need to know about Bing and DuckDuckGo, and what value they might have for B2B businesses wanting to grow their search engine visibility. 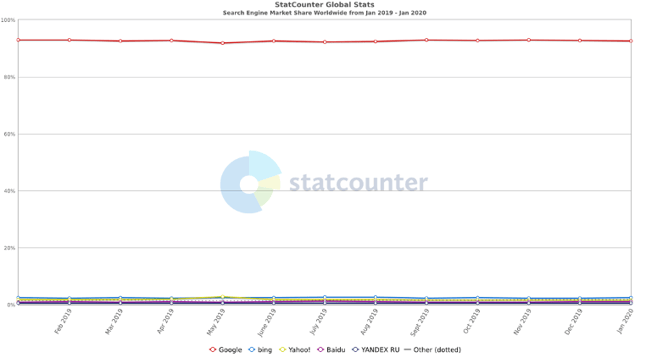 Google owns the internet. According to GlobalStats’ Stats Counter, Google owned 92.51 percent of the search engine market share as of January 2020. Bing, on the other hand, own 2.45 percent, Yahoo 1.64 percent and DuckDuckGo, a measly 0.44 percent.

But despite such a contrast in market share, Bing and DuckDuckGo still hold value in their own respective areas. If we consider the future of search, data privacy and ever-tightening regulations around the internet, there’s a good chance these search engines will grow in market share as Google begins to see some decline.

How Bing and DuckDuckGo have differentiated themselves

There are many features that Bing and DuckDuckGo have that Google also has, but might not focus on.

For example, DuckDuckGo’s biggest USP is data privacy. In fact, the foundation of DuckDuckGo’s entire existence is privacy. Their homepage reads:

As data privacy becomes a priority, we may see a rise in users on platforms like DuckDuckGo, who want to come across as honest, genuine and out for the good of the people, not for themselves.

This is a big differentiator compared to the likes of Google, which faces constant data protection scrutiny in the press, and which tracks users, personalises ads, and occasionally leaks your information to third parties on the internet (like in this 2009 scandal).

Bing may not preach data security like DuckDuckGo, but they do offer B2B businesses benefits when it comes to localisation. Sure, Google has made strides in local SEO as of late (read here), but Bing offer more business personalisation and arguably a better user experience when it comes to local search results.

Their ‘Near Me’ tool, for example, can alert users to local promotions that companies are running. On Bing mobile Maps, you can activate your rear mobile camera and augment your reality by seeing local business information as you point your camera towards, say, a Starbucks.

When it comes to organic indexation, Google is undoubtedly the place you want to focus on – it’s where most of the world goes to find something. Of course, this means there's plenty of competition, and the only way to get ahead is to invest more time into optimisation than others, which’ll cost you in strategy time, hours worked, and words written.

But here’s the thing about Google…

All good things come to an end. As technology evolves, Google has to decline (don’t be naïve by thinking it won’t – Blackberry, Northern Rock bank, the housing market in 2008… need I say more?). Like the stock market, then, your business should be playing a futures game, and when the Google bubble eventually bursts, you’ll be leagues ahead of your competition on Bing if you begin investing some resource into that world now. I’m not saying devise a Bing-specific search strategy, but you should apply the boy scout ruling and make sure you’re always prepared for that eventuality.

Your target audience is the biggest reason to consider Bing in your SEO strategy. As a B2B business, you’re wanting to target other business decision-makers with your content. This means talking to a diverse variety of demographics that, most likely, have many years of experience under their belts.

54 percent of Bing users are aged over 45. Chances are, the business decision-maker at your target company is near enough to or above this age bracket. There’s every probability, then, that they’re a ‘Binger’ and not a ‘Googler’.

While Bing doesn't compete with Google in terms of volume, it does still garner 137 million unique searchers on the platform. If there’s less competition on the platform, an easier chance of indexing higher, and BDMs are using the platform over Google, there’s a reasonable amount of ROI to be had.

Google is of course the place to index on

Okay, so I’ve expressed some real love for Bing and DuckDuckGo in this piece (I’m a big fan of the underdog…), but truth be told, at the time of writing, Google is where you need to be if your B2B business is going to grow.